Stuttgart. After setting the best qualifying time, André Lotterer (GER) narrowly missed out on claiming the third podium of the season for the TAG Heuer Porsche Formula E Team at the London E-Prix. At the wheel of his Porsche 99X Electric, he secured fourth place in the 24-strong field on the ExCeL Track in East London’s historic Docklands. This race marked Porsche’s racing debut in the British metropolis. The 2.25-kilometre course on the Thames is the most spectacular on the Formula E calendar, as part of it runs through an exhibition hall which poses very special challenges for drivers and teams. In the second Porsche 99X Electric, Pascal Wehrlein (GER) also finished in the points with tenth place.

Race 12
André Lotterer left the first strong impression of the race weekend in the British metropolis during qualifying. Clocking the best time – his first this season – he made it into the Super Pole where he posted the fifth fastest lap time. Shortly after the start of race twelve of the ABB FIA Formula E World Championship, which was last contested in London in 2016, he made up one position and set out to chase down the leader. Activating attack mode twice, the drivers were able to call on an additional eight minutes of energy (normally four minutes) each time. When he attempted to activate attack mode for the second time, Lotterer missed one of the three track markings that he should have crossed. As a result, he fell back to fifth place at the beginning of the second half of the race. When a competitor was subsequently disqualified, he gained one position. His teammate Pascal Wehrlein, who narrowly missed out on his second podium result for Porsche at the previous race weekend in New York City, started and finished the race in twelfth place. Due to the disqualification of a team, he inherited tenth place and earned one point.

Comments on the London E-Prix, race 12

Amiel Lindesay, Head of Operations Formula E: “That was a good day for us. André put in a strong drive to make it into Super Pole with the fastest time. Unfortunately in the race, he missed one of the loops to activate attack mode and had to wait until the next lap to use the additional energy. That cost him a possible podium. Still, it was a good race for him. With Pascal, we need to see why he didn’t have the same speed as his teammate. All in all, having two cars in the points is a result we can build on in tomorrow’s race.”

André Lotterer, Porsche works driver (#36): “The points that I took away are good but I’m not entirely satisfied. I missed the attack mode and that cost me a podium spot. I was so close to the driver in front of me that I couldn’t see the line properly. As a result, I didn’t drive over one of them and had to try again. It’s a shame. Now we’ll focus on tomorrow.“

Pascal Wehrlein, Porsche works driver (#99): “Today didn’t go well for me. Qualifying was difficult. The track was still damp when I went out with my group. It gradually dried up and the following two groups had a clear advantage. The start of my race wasn’t particularly great either. One point is some consolation but I’ll attack again tomorrow.”

Next up
Race 13 in London gets underway on Sunday, 25 July. The worldwide broadcasting schedule of the Formula E event in London is available on: https://www.fiaformulae.com/watch/ways-to-watch.

Porsche in Formula E
The TAG Heuer Porsche Formula E Team contests its second Formula E season in 2021 with the Porsche 99X Electric. André Lotterer celebrated a successful racing debut in November 2019, finishing second at the season-opening race in Diriyah after meticulous preparation: a dream start and proof that Porsche had a competitive vehicle right from the outset with the Porsche 99X Electric. This was impressively underlined by the first pole position in Mexico City and another second place on home turf in Berlin. Formula E is the world’s first fully-electric street racing series and, as an accelerator for innovative and sustainable mobility technologies, it has brought thrilling motorsport to people living in major cities since 2014. This season, in which a driver and team world champion will be crowned for the first time, more automobile manufacturers compete than in any other racing series. As such, the races are fascinating and fiercely contested.


More information, film and photo material is available in the Porsche Newsroom: newsroom.porsche.com 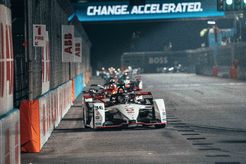 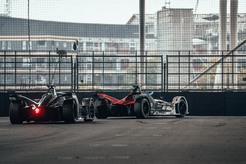 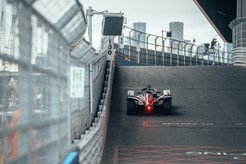